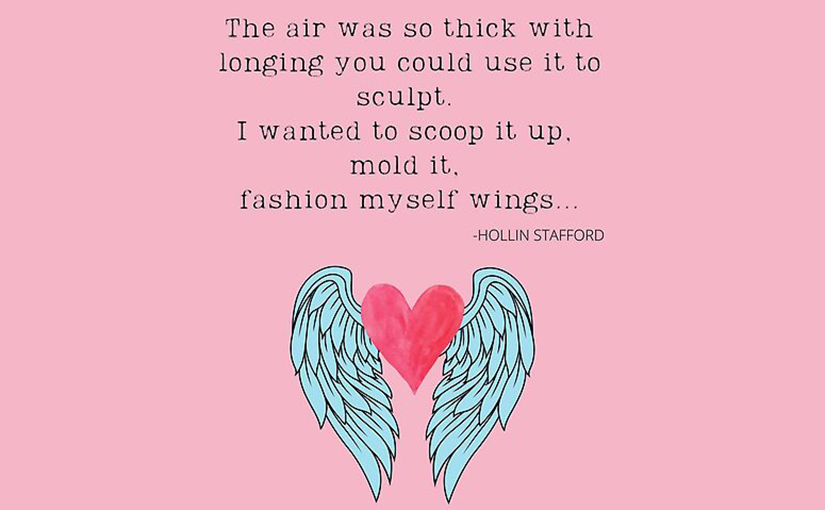 The air was so thick with longing you could use it to sculpt. I wanted to scoop it up, mold it, fashion myself wings. But my feet stuck to the pavement as if glued, my eyes strained to see what was no longer there, my body was lead. The sidewalk, now empty, stretched out in front of me, all ash grey and cracks and weeds—a fractal trail of tears. It bore only the slightest outline of the footprints left behind by the broken hearted. As illogical as it seemed, I wanted nothing more than to be one of them. One of the souls whose form had been reduced to the hushed tone of whispers, to ruinous rumors of contempt and up turned brows. One day—they’d be legend.

Even the see’ers hadn’t seen this coming. Love was not a myth, it was real and it had finally found its way back to our shores. The suggestion had blown in with ships from the Far East, beyond the boundary of our dreams, and subtly slipped into the pockets of those who disembarked. Love wandered our land, carrying with it a strange and tragic hope. It swaggered on street corners brazen with booze, and painted the twilight in rose and mounting doom. It carried with it the scent of jasmine, flitted through windows carelessly left open and waltzed in the halo of streetlamp light.

The story grew. Love slyly took on shape until it was beyond control. We stood there, onlookers of fate, unsure of what to do. We watched as it grew legs, matured and learned to run. It was spotted marauding in the blowing meadows of the Marginal Mountains, arms spread wide, seeking those who looked for it.

It took the hand of a rosy cheeked maiden living in the woods, captured her through poetry, wildflowers and silver tongued song. It led her through fields of lupine, lush and tall, past the tufts of grass that grew on dunes desolate and serene, and out to a place few had been—the Golden Sea. There was shocking talk of her long flowing locks of hair, his chest glinting in the sun, their clumsy tangled embrace. The witness saw them breathing out light, with bare feet on the sand and tender tears on their cheeks. Love.

The first time I saw it I didn’t know what it was. It was all warm skin and twinkles and butterfly wings. My friend laughed at me as if I were three, explained the obvious stance, the confidence of the hips, and determined defiance around the eyes. Once it had taken hold it was impossible to hide.

Though I could never admit it out loud, I could see reflections of myself in those who’d fallen – into Love. Pieces of me as old as stone, had been unearthed in them, and now shone on the surface like precious, dangerous gems. I wanted to collect every one, fit them together, make sense of it all.

Love. The word used to describe the malady, had been used here before. But it was long ago, in ancient times, when the winds would blow from the North and trees grew to dizzying heights. It had not been seen in this district since the sky was a deep blue, since brilliant birds soared above—not since the sea could sing. I’d heard how it had spread like angel wings. Encompassed even the space between mother and child. How the thing was so powerful, so frightfully strong, it could bond entire families, communities and towns.

They’d explained from the time we could understand, the importance of keeping it away. How it had sent countless to their knees, writhing in pain, how they were left to decay.

It was a thing to run from, to be completely feared. It was something, that once you had, was impossible to cure. When the sickness took hold, your mind would begin to wander, your heart would start to race and everywhere you looked, you’d see its face. The rolling hills would sway and shift, become paintings of discombobulating delight, the sky would sparkle at odd times of day, there would be no more dark and lonely nights. Whatever you did, was just to work your way back, to it. You would grow slowly crazy, no longer clearly see. People would lose themselves so completely—they would no longer be free.

And now, the footprints of those who carried it back to us have started to fade. I stand apart, a small group nearby, staring in disbelief. The phenomena took a huge toll, this plague of the heart, this confused and befuddled path. Our leaders came down hard. Our numbers were reduced to digits not seen since before the great wars —of Cupid and Eris. Families were torn apart. They found paintings and music and treasures of the heart, in the darkness of basements and hidden in the forbidden woods.

Already, the cleanup had begun. Whole fields of flowers had sprung up and needed to be burned. Nightly bonfires in the shape of double beds, frilly frocks, and lockets fashioned of gold, filled the air with suffocating smoke. People hid behind doors unwilling to watch the display, loath to shed tears. The smallest sign or unfamiliar act of dismay could transform them into footprints and they too would silently fade away.

I watched in silence as people went about their day. The word forget was muttered in bathroom stalls and pinned over desks at work. They had to let go of what they’d seen. Wait for the bright stories of passion to dim to mere dreams. They’d pretend it never happened as the last tendrils of Love released the land from its grasp. It would blow away in the coming season,

invisible ripples caressing the dying grass. The memories caught by the boldest of branches would woefully wither and fall from the tree. And for those who’d brushed against it, they’d learn to breathe again, and their hearts would slowly close as gentle and quiet as fairy wings.

My throat was thick with unspoken words, my chest heavy with heart, the existence of which, before, I’d scarcely been aware. I stood alone and for the first time understood what it meant.

I’d met him just before Love was forced out. He had arrived, like the others, by ship with a sail full and bright. He had a smile that seemed reserved for me, a table set for two, eyes that sparked in golds and reds and set me both aflame and adrift—he made me feel new. He tore my beliefs to shreds, sent them scurrying for cover. Left them to flip through books, searching for truth, the difference between what was taught and what was.

He was sweet and clumsy and laughed with ease. His form was all curving gestures of grace and muscles strong with work. He talked of things I’d never seen, sent my imagination soaring. We drank wine and ate figs and swayed to foreign music played by foreign men. He promised to take me with him. We’d sail away together, gliding over the grey smoke water and creatures of the deep. We’d land in a better place, one he’d seen before, where snow fell white and clean and the trees were ever green—where you could almost touch the stars.

In the end, the boat was destroyed, and not a wing among them did sprout. They were forced to leave on foot, on the one way road, out. I wanted to run, to catch up and call his name aloud! But my father’s large hand lay upon me, his face was so strong, his disapproval so loud. My mother to the other side watched with eyes of steel, with nothing about her of which to make me feel, no warm thread to tie me here and no promises to abide. Any moment my knees would give, I’d crumple to the ground and hide, as countless hands clawed, bore me away to prison, or empty land or some form of alone. But what did it matter? With my Love now gone, what purpose did I have? How long before I would melt, disappear into the grass, seep deep into the ground?

There are those who see. They see the futures, the many paths we may take. But they didn’t see this, in the ordered lines of patrons hands nor in their balls of crystal. What had cloaked their vision so completely, from this onslaught, from this fever of Love?

I am not like the others. I do not want to forget. I have a pile of ash, composed of flames sparked in hate and fueled with tokens of Love. Perhaps one day the winds will blow from the North again. And the seas will toss wild with desire. And I will cast these remnants of shared beds, heartaches and dreams into a soft breath of air. And it will travel the many miles to where my Love now waits and it will lie with him there. Out of the ash my form will take shape, find us together again, fresh faced and new. And all that will remain of me here is the faint echo of my surprise.

One thought on “Love”