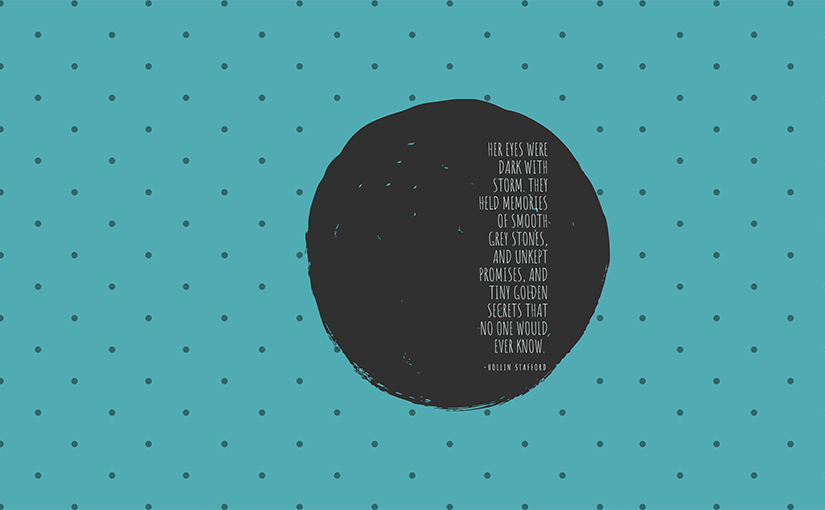 They say Anna Margarita came from Portugal, that she sailed across the sea in a boat made of paper and string. I remember as a child asking how a boat of paper could float. They said it floated on hope, and that it was bluer than the sea, and that it had a crimson sail she’d sewn out of her own broken heart.

I look at my grandmother. She sits in the corner rocking, her chair moving to the beat of a song no longer heard except maybe by others her age. She’s old, the kind of old you’re afraid to touch for fear her papery skin will flake and fall to the floor. But she is the only one who can bring me home, the only one who was there the day Anna Margarita arrived.

Anna Margarita, her cheeks flushed and wet with ocean spray and hair a tangle of seahorses and shells. And lashes thick over eyes dark with storm that held bags filled with memories of smooth grey stones, and unkept promises, and tiny golden secrets that no one would ever know.

As a little girl I’d sit on the floor next to my grandmother’s gigantic feet and listen to stories of Anna Margarita, of how while gathering eggs her thin arms would bend and quiver like the willows that drank from the pond. Of how she never spoke to people, but would sing to the  mares in a high melodious song that made my great grandfather cry.

My grandmother was just a girl herself when Anna arrived at the farm. She said she came at dawn in the middle of May, dress still wet with sea and feet damp from dew. She’d wandered from the beach, walking over dunes covered in marram grass and sandwort, and into a night that buried the hills in black. She’d spotted the light of their farm — a soft halo rising above the berm like a crown. When the rooster called from his perch, my grandmother looked out her window and Anna Margarita was standing there…a small wilted weed amongst the tall green grass and a sea of violet blue. She told me how even through the thick wavy glass of her window on the second floor, in the early morning light that was still more a blush than a day, she could see Anna Margarita would come to belong there. She told me how her small body curved gently to one side, mimicking the bluebells that spread out around her like a giant periwinkle quilt. And how during the daylight hours the stars sought refuge in Anna’s eyes.

While I was still young and my grandmother was just slightly old, she would sit in her father’s green velvet chair and crochet big squares of red and orange or purple and blue, filling her lap and the floor around her in looping pools of cotton. I’d watch as her hands moved quickly, deftly making intricate design from long pieces of yarn that moments before were mere potential. Murray, the cat, would sit on her shoulders watching from amongst her birds nest of loose grey hairs. He never chased the yarn, he just licked his paws and purred. My grandmother smelled like lemon soap and Jergens lotion and bacon. She didn’t look at me as she spoke, as if she’d forgotten I was in the room, as if she was in another room somewhere far away. Her mouth would rise now and then in a small show of smile then fall with a thud to the floor, following the memories that flooded the space around us. Her smooth tablature of a long life lived, ebbed and flowed, massaging the flower-papered walls and fingering our hair. And I’d inhale it all from my perch on the rug, knees pulled up below my chin with my arms wrapped around me — and wish for my life to always be this.

When her mouth stopped, I’d run my small hands over the tops of her socks reminding her I was there. And as I begged for more I’d open my eyes as big as a doe, so she could see all the way to my soul and know that I didn’t just want the stories, I needed them. I couldn’t explain why, but I understood they were full of important, of something truer than truth. My grandmother would lean down and pat my hand. She’d reach for another skein, tie off and start another square, the red and orange or purple and blue growing with every word, until it became a blanket of starbursts or sunflowers or sailing ships.

I used to think the stories she told me about Anna would somehow become part of the blankets and found myself over the years reaching for that red and orange or purple and blue after another broken heart, lost job, or dead friend. I’d cling to the blankets, sniffing at them for traces of Anna Margarita, for the smell of bluebells, fresh grass or the sea…

Now I walk over to my grandmother and kneel down.

Grandmother, it’s me. I wait as she slowly moves her head and raises her face to mine. Her eyes are clouded and faded like the crushed velvet of my great grandfather’s chair.

Anna is that you? She says.

No grandmother, it’s just me. I’ve come to hear your stories. The stories of the sad girl who sailed the sea alone in a boat made of paper and string. Anna Margarita the girl who fashioned a sail out of her own broken heart and somehow grew wings…